Talking specifically about various popular technologies used for creating RIA applications, Adobe Flash, Microsoft Silverlight, and Sun Java top the list. Silverlight is a pioneering addition in the field of technology. It is a well-acclaimed Microsoft Technology which assists the developers in creating a number of rich interactive web applications. These applications are supported with best user interface features as well as superb functionalities which are not available in the standard web applications. Online document editors and image processors are some popular examples. 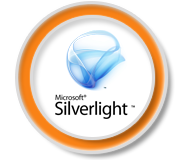 The key highlight of Microsoft Silverlight is that it runs everywhere across all platforms, devices and browsers. To put it simple, it functions on Internet Explorer, Mac, Windows and Linux, Mozilla Firefox, Google Chrome, and others without any hitch. To user’s surprise, it can function really well on PCs, handhelds and varied mobile devices too. One needs not to change the code to run it anywhere! Isn’t it amazing?

Silverlight is also hosted on multiple servers without exceptions. It functions quite similar to many of the desktop applications when compared on the basis of interactivity and features. It is a well-thought development aimed at functioning effortlessly on many Windows Phones.

Like other applications, Microsoft Silverlight is available through a plug-in, thus, its runtime needs to be installed on user’s machine to begin the function. Silverlight has been highly reviewed for its amazing functionality and user-friendliness. Summing up few of its key features, we have the following list to unfold: