Majority companies in IT industry are service providers. They are developing solutions based on customer requirements and managing a number of projects with a large number of the employee base. Companies are now realizing that recruiting Full stack developer who has single skill will not help to grow the business and fulfill the market requirements. The company wants a developer with knowledge of multiple tools and technologies considerably more useful.

After a little research, I came to know that as the web has become more complex and more possible on the Internet, developers have gotten more specific. And that means that instead of developers who do all this, many focus on specific parts of development: 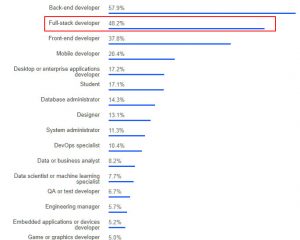 According to StackOverflow Survey

Front-end development mostly focuses on what some might call the “client-side” of development. Front-end developers will be engaged in analyzing code, design, and debugging applications, ensuring an intuitive user experience. You manage people who first look in your browser. As a front end developer you are responsible for the look, feel and design of the site. For the full stack developer, it is important to have knowledge of HTML, CSS, and JavaScript for the front end frameworks.

Top 2 Front-End Frameworks in 2019 for developers

1. Angular.js is JavaScript-based framework developed by Google. It is favoured framework of the largest developer community. It is useful to develop single page application with enabling HTML by including features for building user-interface dynamic-views which are interactive.

2. React.js is maintained by Facebook and also JavaScript-based framework. It used for developing single-page web application and mobile applications. Its performance is very high on complex user-interfaces using a virtual DOM rendered optionally at the server or client-side with communications both ways.

There are also other frameworks which are being used for frontend development; Vue.js, Ember.js, Knockout.js etc.

Back-end development refers to the server-side of development, where you focus primarily on how the site works. In addition to monitoring the functionality of the site, it will be your primary responsibility to make updates and changes. This type of web development typically consists of three parts: a server, an application, and a database. The code written by the back end developers is the one that transmits the information of the database to the browser. Nothing you can easily see such as database and server back end is the work of the developer. Back end developer positions are often called programmers or web developers.

Top 3 Backend Frameworks in 2019 for developers

1. Nod.js is based on open source server-side technology based on JavaScript. It allows the development of Web servers and networking tools using JavaScript and a collection of “modules” that handle various core functionality. Modules are provided for file system I/O, networking (DNS, HTTP, TCP, TLS/SSL, or UDP), binary data (buffers), cryptography functions, data streams, and other core functions.7.

Full stack developer, who has knowledge and curiosity of how to use various technology and where to fit them in various scenario of project development.